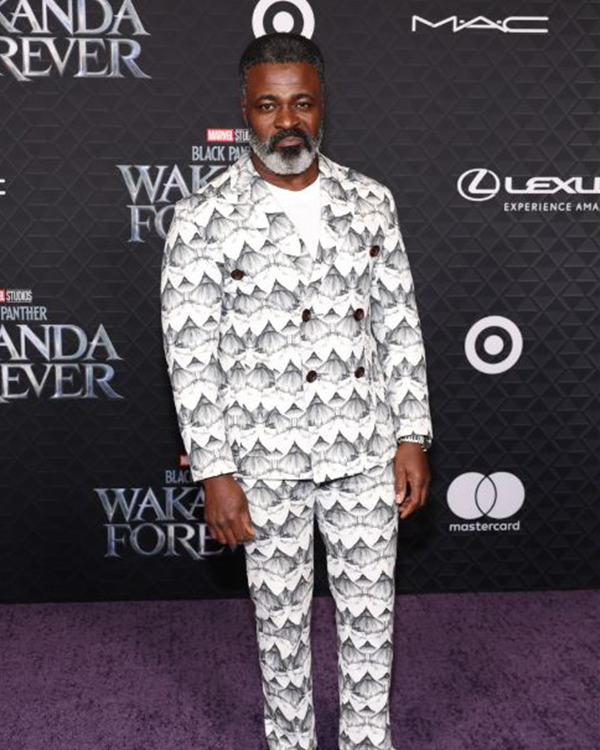 Black Panther: Wakanda Forever is a superhero film premiered at the El Capitan Theatre and the Dolby Theatre in Hollywood on 26th October 2022. It was released in the United States on 11th November 2022 as the final film in Phase Four of the MCU. It is based on the Marvel Comics character Black Panther. The film is produced by Marvel Studios and distributed by Walt Disney Studios Motion Pictures. It is the sequel to Black Panther, released in 2018, and it is the 30th film in the Marvel Cinematic Universe, directed by Ryan Coogler, who has also co-written the screenplay with Joe Robert Cole. The film follows the leaders of Wakanda who fight to protect their nation in the honor of King T’Challa’s death. Danny Sapani is reprising his role as the Wakanda border Tribe elder in the film, and he looks fabulous in this Black Panther Wakanda Forever 2022 Danny Sapani Floral Suit. You too can have the same suit that Danny wore in the pictures. so what are you waiting for? All you need to do is; place your order before the stock ends.

This modish men’s coat is manufactured with excellent quality cotton blend material, with a soft viscose fabric lining inside. It is beautifully designed with a notched lapel collar, long sleeves with open hem cuffs, two waist welt pockets outside, two pockets inside, and a front opening with a buttoned closure. This beautiful coat is accompanied by a pair of pants manufactured with the same material having long straight pants sleeves with open hem leg cuffs, two waist pockets in front, one pocket at the back, and a waistband fastened with a hook and eye fastener. This men’s stylish cotton blend suit is available in white color with a black floral print.