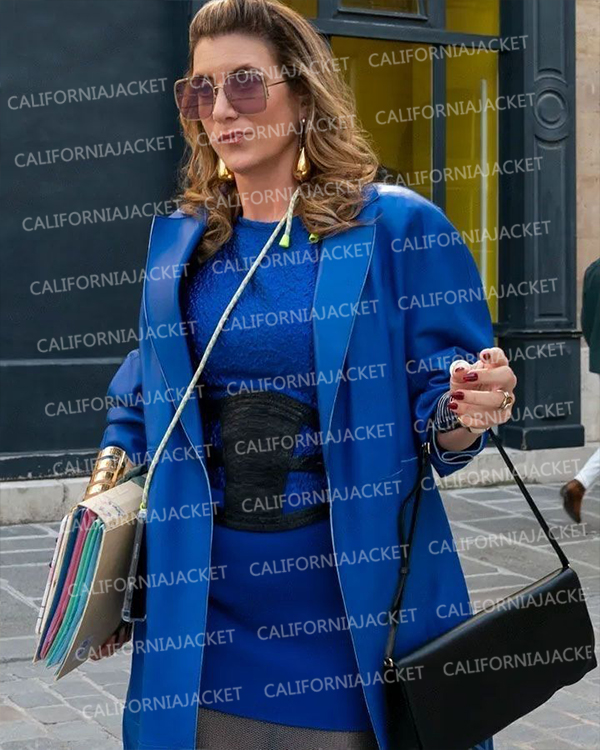 Philippine Leroy-Beaulieu is a French-Italian actress. She is the daughter of actor Philippe Leroy-Beaulieu. She starred in the title role of the French film Natalia, which was screened at the 1988 Cannes Film Festival. In 1985, she played her first major screen role (and earned a nomination for the César Award for Most Promising Actress), playing the distraught mother in Trois hommes et un couffin (Three Men and a Cradle). The success of Coline Serreau’s comedy helped her film career and a string of parts in costume films followed such films as Andrzej Wajda’s Les Possédés in 1988, Philippe Le Guay’s Les Deux Fragonard, and Robert Enrico’s and Richard T. she is spotted wearing Emily In Paris S03 Philippine Leroy-Beaulieu Blue Coat in Emily in Paris. So don’t waste your time and order this coat before it gets out of stock.

This stylish coat is made up of high-quality wool blend material with a soft viscose lining which protects you from the cold winds. It has a lapel collar. Moreover, it is stylishly designed with a front open zipper closure. It has two waist pockets outside and two pockets inside to keep your valuables safe. It further has full sleeves with button cuffs and is available in blue color.